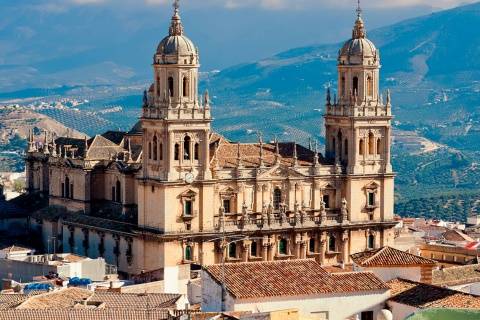 Posted at 10:01h in General by Yissel Álvarez

Located in the eastern half of Andalusia and surrounded by the mountains of Jaén and Jabalcuz, Jaén is one of the least known provincial capitals of Spain. Located at the foot of the Sierra de Santa Catalina, Jaén is a capital with a flourishing historical and cultural heritage, with its beautiful and imposing baroque cathedral, its fantastic Arab baths of the eleventh century and an important museum offer to know.

Monumental cities such as Úbeda and Baeza, listed as World Heritage Sites, natural areas such as the Natural Park of the Sierra de Cazorla, Segura and Las Villas or historical sites such as the Castle of Sabiote, the Fortress of La Mota or the Castle of Burgalimar in Baños de la Encina make the province of Jaén a region worthy of being visited in depth. The capital itself is much more interesting than you might think at first glance. What better way to visit it than renting a car at Haro Rent A Car.

WHAT TO VISIT IN JAÉN IN A DAY

The Holy Church Cathedral of the Assumption of the Virgin that, although it is a mixture of styles like almost all cathedrals in Spain, is considered as a whole as the most important Renaissance cathedral in the country. It was not the first cathedral that existed in Jaén, since the current one was built over a Gothic temple that finally collapsed after several vicissitudes and, specifically, after the collapse of the dome in 1525. It was at this time when the architect Andrés de Vandelvira, considered one of the greatest Spanish architects of the Renaissance, came to prominence. We will discover some of his works in the monumental buildings of Úbeda and Baeza.

It was built in baroque style in the 17th century. The large Corinthian columns that support the second part of the facade stand out, as well as the large number of sculptures, some in niches, others in plinths: St. Peter and St. Paul in the lower part and several saints of the church in the upper balustrade. Two bell towers close the main facade at each end. Also noteworthy are the various balconies at the top of the first part of the facade.

Among the treasures that we find when visiting the cathedral of Jaén, it is worth mentioning the main chapel or chapel of the Santa Faz, with its neoclassical altarpiece. It is in this chapel where one of the most important relics of the church is kept: the Santa Faz. Or, in other words, the cloth with which the Veronica wiped the face of Christ during his last journey along the Via Dolorosa to Jerusalem. No less interesting are the enormous choir with 148 seats, the beautiful marble stalls dedicated to the Holy Family or the chapter house and the sacristy, both designed by Andrés de Vandelvira and considered one of the great moments of the Renaissance in Spain.

3. The castle of Santa Catalina

The Cerro de Santa Catalina is known to have been inhabited for several millennia. For example, remains from the Bronze Age have been found here. However, the Iberians built an early defensive structure, which also served similar functions in Phoenician and Roman times. But what we can see today is the New Alcazar, built in the Christian era, which replaced the Old Alcazar, which existed in the Islamic era and was located exactly where the Parador de Turismo is located today.

4. Arab Baths and the Palace of Villadompardo

The Palace of Villadompardo, as in all Andalusia, the remains of the Arab domination are scattered throughout the city. The most interesting are the Arab baths, which have stood the test of time, since when the Counts of Villardompardo built their palace in the same place (in the 16th century), they did not destroy the old baths, but simply filled the holes with abundant earth to build the foundations of their new mansion.

In fact, the Arab baths of Jaén were not rediscovered until 1913 and, from 1936, restoration works were undertaken to bring to light such an important heritage. These works were not completed until 1984, thanks to a project by the architect Luis Berges Roldán, who received the Europa Nostra award for excellence in the conservation of cultural heritage.

These Arab baths of Jaén, which probably date back to the 11th century, are truly a marvel. They are rightly considered to be the best preserved in Spain, and in them you can clearly see the different bathing rooms (cold, hot and warm), with the usual star-shaped skylights, as well as the vestibule.

The story goes that Ferdinand III, when he conquered the city from the Arabs, ordered a Christian cross to be erected on the highest point of the city (i.e., on the hill). Obviously, the first cross was the same one that the holy king would have nailed in such a sublime place.

Actually, the present cross is quite recent, dating from the mid-20th century. It replaced an earlier, much smaller cross. But if it is really worth coming here, it is not for the cross, but for the magnificent view over the whole city and the surrounding area that can be enjoyed from this place. In fact, it is the only place on the hill where you can see the cathedral, for example. To the right, you can see the Sierra Mágina, another natural park in Jaén. It is said that on a clear day you can even see the Sierra Nevada.

6. The Iberian Museum of Jaén

Among the different museums that can be visited in Jaén, the Iberian Museum stands out, inaugurated at the end of 2017 and destined to become a national reference. The guided tour allows you to discover the more than 1,600 pieces on display in the museum. Among them are works as fascinating as the Porcuna sculptural ensemble, from the Cerrillo Blanco site, in Porcuna, province of Jaén. The warrior with double armor and the Porcuna bear are two of the most fascinating Iberian sculptures in the museum.

It is impossible to think of Jaén’s tourist attractions without associating them directly with nature in its purest state. There are many natural areas in this province that should not be missed under any circumstances and should be known to perfection. The best known is the National Park of Cazorla, Segura and Las Villas, one of the largest natural parks in Spain, declared a biosphere reserve by UNESCO in 1983. It offers a multitude of hiking trails, breathtaking scenery, unique wildlife and magnificent views. The Sierra de Andújar Natural Park, in the south of the province, is another famous area, where the Basilica of Nuestra Señora de la Cabeza is located. In any case, there are many possibilities: the Natural Park of Sierra Mágina, the Natural Park of Despeñaperros or the Suburban Park of Monte La Sierra.

If you want to enjoy these amazing attractions and trips in Jaén contact Haro Rent A Car Hire Car Services in Estepona to get special discounts!