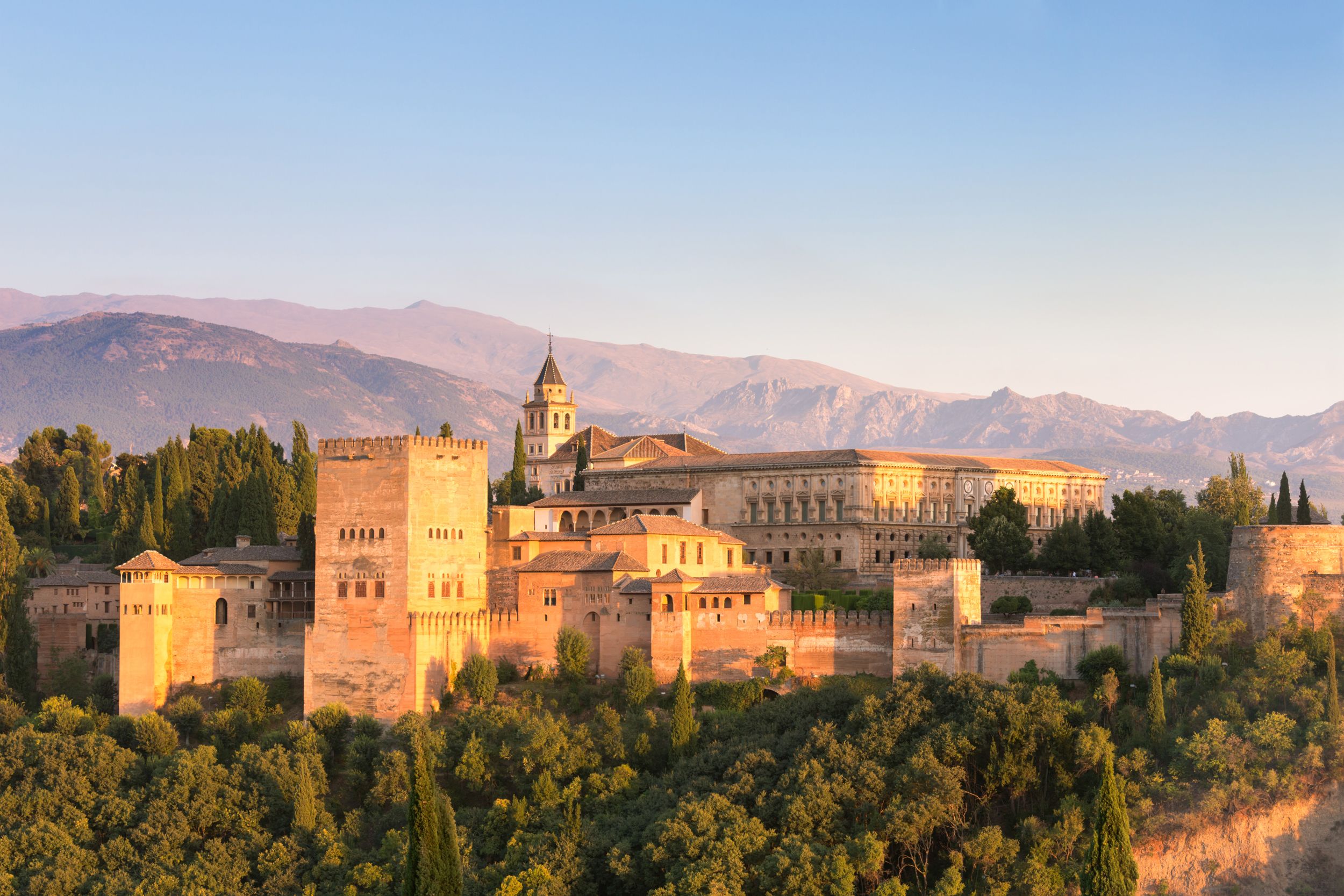 Many are drawn to the vibrant Spanish city for its show-stopping hilltop fortress, the Alhambra. But all are soon swept up by the fast, fun pace of life in the city. Lose yourself in the maze-like streets running through lively neighbourhoods like Realejo and Albaicín, where tender tapas are dished out for free with every cold glass of beer, and powerful street art adorns weathered walls. Here are a few reasons to launch yourself into the heart of Granada and beyond. Continue reading this post by Haro Rent A Car Car Hire Services to discover this gem!

The Alhambra stands majestically on a fortified hilltop with the snow-peaked Sierra Nevada Mountains as a backdrop. An absolute must-see attraction in Granada, this UNESCO-listed World Heritage site was the residence of the Moorish rulers of the Nasrid Dynasty for 250 glorious years, from the 13th to the 15th centuries.

The complex of palaces was the Moors’ last stronghold in Spain. A veritable museum of Islamic architecture, the Alhambra is surrounded by ancient defensive walls and appears from afar to be an impenetrable fortress.

The Alhambra complex consists of four groups of buildings in carefully landscaped grounds. The Alcazaba is the original 13th-century Moorish fortress, the oldest part of the Alhambra. All that remains of the Alcazaba are the ramparts and the towers.

The Palace of Charles V was built in the 16th century after the conquest of the Moors and was used by the Spanish emperor as his summer palace.

Beautiful and serene Moorish gardens surround the Generalife Palace, which was used as a leisure villa by the sultans of Granada. The grounds feature shady patios, fountains, fragrant roses, and flower-adorned terraces overlooking the places of the Alhambra and the mountains.

The sumptuous grounds of the Alhambra are so huge that you might even need another day to see them.

These lush and stately gardens are especially fragrant in springtime and have colourful flowerbeds, neatly trimmed hedges and toparies, geometric pools and fountains and all sorts of surprising architectural flourishes.

The unforgettable part though is the Generalife Palace, which is at the crest of the hill where the Emirs would spend their summers in the shade.

The fountains here would cool the air as their waters evaporated on the patio’s paving stones.

Head north up the hill from Plaza Nueva to get to Granada’s Arab quarter that is also part of Granada’s UNESCO site.

After the reconquest this is where the Moorish population that wanted to remain in Granada settled and it’s impossible to ignore the influence on the architecture of this captivating part of the city.

Eventually the Muslims were expelled and their mosques became churches.

As befits a Medina, the streetplan is a tangle of tight alleys with tall townhouses painted white.

The hand-painted Moorish tiles adorning the walls here are very pretty and worth a close look.

If you’re at the top of the hill to visit the Alhambra, don’t go back down without first wandering around the Carmen de los Martires Gardens, one of the city’s most attractive green spaces. Because the majority of visitors head straight for the Alhambra, this lovely haven of flowerbeds, small ponds and leafy paths is only ever sparsely populated with guests. In spring and summer, its shaded walkways provide a sanctuary from the powerful sun, and its views of the landscape beyond Granada give a sense of space that can be lacking in the cramped city center. A fairytale tower sits in the middle of this verdant oasis; climb up its small spiral staircase and survey the gardens and Granada from the city’s most romantic viewpoint.

One of Albaicín’s key architectural attractions is this elegant and understated Moorish palace. Its name means “Home of the Honest,” and it was the residence of the sultana Aixa, mother of Muhammad XII (known as Boabdil to the Spanish), the last Moorish King of Granada. In traditional Moorish style, its quarters and rooms are located on three levels around a central courtyard and pool, which provided shade and cool in the summer. Also remaining are parts of what were once extensive gardens and orchards. Aixa is reputed to have bitterly rebuked her son for losing Granada as they fled the conquered city in 1492; perhaps she didn’t just have the loss of the mighty Alhambra in mind as she did so.

At the center of old Granada is the city’s great cathedral. Work on this imposing Gothic, Renaissance, and Baroque structure began in 1518 and, although it took over 180 years and successive architects to build, it’s still not entirely finished: two 262-foot (80-meter) towers were originally planned, but only half of one was ever finished. The cathedral’s towering façade is largely the work of Granadino architect and artist Alonso Cano, who introduced Baroque features when he took over its design in 1652; Cano’s input further contributed to the intriguing mixture of styles that characterize this awesome structure.

Next to the cathedral is the resting place of two of Spain’s most important rulers.

The Catholic Monarchs, Islabella I and Ferdinand II are interred here, and had completed the Christian re-conquest of Spain from the Moors at the end of the 1400s.

Their beautiful tomb is made from alabaster and was designed by the Italian sculptor Domenico Fancelli.

The tombs of their, successors Joanna of Castile and Philip I, are also in the Royal Chapel, as well as the Catholic Monarchs’ grandson, Miguel da Paz, the Prince of Portugal who died in infancy.

In the Islamic days this was the location for Granada’s Great Bazaar, where merchants would tout their silks and spices along several crisscrossing streets.

Nowadays what’s left is a single passageway full of souvenir shops, some of which hold more interest than others.

If you’re searching for a gift that really represents Granada and Andalusia, try Fajalauza ceramics, Moorish-style earthenware, hand-painted with blue or green motifs of plants.

East of Albayzín and in front of the Alhambra is another of Granada’s traditional neighbourhoods.

After the city was retaken by the Catholic Monarchs Sacromonte became the home for the city’s gypsy community.

The neighbourhood is on the precipitous slopes of Valparaíso amid pines and cactuses, and at some point in the 16th-century the settlers began to hew their homes from the rock-face.

As you stroll past these dwellings you’ll notice how no two cave houses are the same, as their dimensions are determined entirely by the difficult terrain.

Naturally, if you want to see a true flamenco performance,  these caves are the real deal.

9. The Gypsy Quarter of Sacromonte

Granada’s colorful Gypsy quarter on the Sacromonte (“sacred mount”) is a fascinating place to visit. This hilltop neighborhood begins around the Cuesta del Chapiz, where the Camino del Sacromonte ascends the hill. The Gypsies (Gitanos) have had a presence in Granada since 1532 and settled in the caves of Sacromonte in the 18th century.

Tourists will enjoy wandering the hillside roads of this atmospheric neighborhood to discover the artistic Gypsy homes; some are decorated with vibrant handcrafted ceramics. The caves in the upper area of the Camino del Sacromonte are in the best condition, and one has been made into a museum, so you can see inside.

Tourists can find many cave venues in Sacromonte where flamenco is performed, including Cueva de la Rocío, whose famous guests have included the King of Spain, Bill Clinton, and Michelle Obama. The Cueva de la Rocío is renowned for La Zambra, a special type of flamenco dancing and singing that originated in the gypsy caves of Granada.

The Sacromonte offers some of the best views in Granada, with panoramas over rugged ravines, the Valparaiso Valley, and the Darro River. Some vantage points look out to the Alhambra Palace and the Albaicín.

A steep and picturesque footpath (a difficult walk) climbs through deeply indented gullies to the Ermita San Miguel de Alto. This 17th-century Baroque hermitage has a magnificent viewpoint of the Alhambra and the Albaicín.

Another noteworthy religious monument is the Sacromonte Abbey. Built in the 17th and 18th centuries, the Abbey’s church is a gem of Baroque architecture. Standing on Mount Valparaiso and accessible by the Camino del Sacromonte (a 10-minute taxi ride from the Plaza Nueva), the Abbey is open for guided tours. Several caves were found on this site, which possess precious relics of the 16th century, as well as a cross of Saint John.

The Moors brought the ritual of the hammam (Arab Baths) from their homeland in North Africa to Andalusia, and Granada’s 11th-century Bañuelo are among the oldest and best preserved in Spain.

One of the few bath complexes not destroyed after the Reconquista by the Catholic monarchs, who considered the baths as immoral, they are one of Granada’s oldest surviving Moorish sites.

Today, visitors can sample a similar experience to the Arab baths at the Hammam Al Ándalus near Plaza Nueva. Although it is on the site of an original Moorish bathhouse and constructed in the authentic style, with graceful arches and exquisite Islamic-style tile work, this hammam is a newly built replica and offers the latest pampering spa services.

If you want to enjoy this amazing routes in Granada contact with Haro Rent A Car Hire Car Services in Estepona to get special discounts!